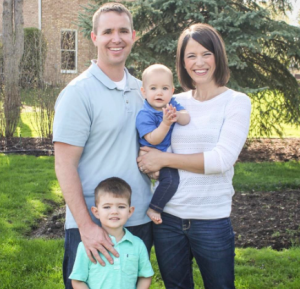 Congratulations! You have stumbled across a webpage that has probably only been viewed by Shawn Clarke himself and perhaps by members of his immediately family. Actually, they have probably never looked at this page either! But hey, you are here now…so why not take few minutes to learn a little bit about him and if you want send him an  email.

Shawn Clarke was born on November 3,  1979 in the small town of McPherson, Kansas. No he has never met Dorthy or Toto, but he has chased a number of tornados around farmlands of central Kansas! He was “delivered from the domain of darkness and transferred to the Kingdom of the beloved Son, Jesus in whom he has found redemption, the forgiveness of his sins.” This happened on June 8th, 1996 going into his junior year of high school. With a desire to serve the Lord in His Kingdom, he packed up His belongings and headed to downtown Chicago to study at Moody Bible Institute. Upon arrival, amidst the skyscrapers and restaurants not named McDondald’s or Burger King…he had “a feeling that he was not in Kansas anymore!”
While in Undergraduate school, he met his best friend in the world and eventually she became his wife. Shawn and Suzanne married in Suzanne’s home state of Alaska on July 16 , 2004.  Wanting to remain in Chicago, Shawn continued his studies and finished his Masters of Divinity from the Moody Graduate School in the spring of 2006.

Shawn has attended Bethel Community Church since the Fall of 1999 and has been on staff since 2004. He loved serving as the Student Ministries pastor from 2004-2011, but has transitioned into being the Pastor of Music and Worship. This happened in 2011.  Oh, and he loves what he does! Shawn and Suzanne’s lives were blessed a hundred fold in the summer of 2013 when their son Elijah Philip Clarke was born on August 5. They were blessed again on May 30, 2016 when their second son, Asher Lewis was born.

Everything you never cared to know about Shawn Clarke:

He likes guitars, music and singing. He finds joy in acting like a little kid and hanging out with them. He yells at the television when watching the Kansas City Chiefs play football (oh and the Bears too). He makes sure to take at least one day off every year…the opening day of the March Madness Tournament. He thinks that Jack Bauer is like the coolest person in the world because basically he has saved it 8 times now. He could listen to Andrew Peterson on repeat for the rest of his life. He burns candles in his office all the time. He leaves his Christmas decorations up way after Christmas. He has been seen walking around barefoot in the office and barefoot in the snow when he takes his garbage out to the curb on Monday nights. And he used to take bags of Doritos and smash them into tiny pieces, dump them in a bowl and eat them with a spoon! Nothing out of the ordinary, just the typical stuff you look for in a pastor.
Secretary
Kathy Belcher
Pastor of Student Ministries
Mark Shoemaker